VERDICT OUT! BTS ARMY's bias wrecker is none other than...

BTS is a septet, yes, but we know, one of them may hold a special place in your hearts for sure, ARMY. This reminds us of the bias wrecker poll we conducted long ago. It's time to declare the results.

Bangtan Boys are ruling hearts across the globe and how! And it's just not the music but also their boyish and handsome charm, their looks and their goofiness. Especially the last part. BTS is full of goofiness, and that's what attracts the BTS ARMY most. But don't let that fool you, their on-stage personalities are sooo HOT that it'll leave you panting for breath. Moreover, they seem to have taken over the fashion world too. Their dressing sense at events, in shows, awards or airport, everything becomes the talk of the town. It is a septet, yes, but we know, one of them may hold a special place in your hearts for sure, ARMY. And that brings us to the BTS poll that we had conducted some time ago. We had asked y'all ARMY to name your bias wrecker. And today, we will be declaring the results of the same.

Now, you may be shipping/ stanning OT7, we know. But you've gotta admit that either of them must have captured a special corner in your heart due to their nature, mannerisms, style, looks and more. So, coming to the poll result. The bias wrecker of the majority of BTS ARMY is Jungkook aka Jeon Jungkook. He secured about 27% of the votes. Following him is none other than Most Handsome Man V, aka Kim Taehyung, who has earned about 26% of the votes.

Jimin, aka Park Jimin, who will celebrate his birthday next month has secured 17% of the votes. Suga, aka Min Yoongi, got 10% of the votes. RM, aka Kim Namjoon, and J-Hope, aka Jung Hosoek, both, have got 7% of the votes. And Worldwide Handsome Jin has got about 6% of the total votes. We wonder who their biases are if these are their bias wreckers. Check out the poll result below: 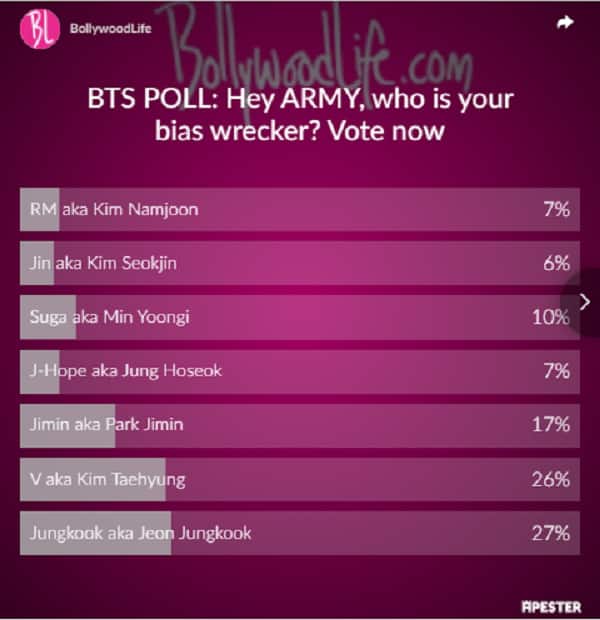