BTS POLL VERDICT! Army picks THESE two members from Maknae and Hyung line as the GOOFIEST

A couple of weeks ago, we had conducted a poll asking y'all, ARMY, as to who is the goofiest amongst RM, Jin, Suga, J-Hope, Jimin, Taehyung and Jungkook. And it's time we declare the results...

Just the other day, when Bangtan Sonyeodan aka BTS came live before they began working again on their LA concert, we saw how goofy they were, yet again. And that reminded us of the poll we did, asking y'all, ARMY, who was the goofiest of the septet. And you have answered generously. It's time to declare the results of the BTS poll of the goofiest member of the global K-pop icons. The numero uno spot has been grabbed by a maknae line member and following him is a BTS member from the Hyung line. So, here we go... Also Read - BTS POLL result: Jungkook's director skills from G.C.F in Tokyo impresses ARMY the most

Grabbing the top spot for being goofiest is none other than the Winter Bear and Sweet Night crooner, V aka Kim Taehyung. TaeTae bear got about 31% of the votes. Following Taehyung is none other than Worldwide Handsome boy, Jin. The Epiphany singer and Jirisan OST crooner have got 23% of the votes. The third spot in the goofiest scale has been taken by the Golden maknae, the Euphoria hitmaker, Jungkook aka Jeon Jungkook. JK's got 17% of the votes. The next in the queue is Jimin aka Park Jimin. The Filter and Friends hitmaker got 11% of the votes. Also Read - Trending Hollywood news today: BTS members mark their debut on Instagram, Alec Baldwin deletes his Twitter account post Rust incident and more

The next three are from the Hyungline that is RM, J-Hope and Suga, in that order. The No More Dream lyricist and composer got about 6% of the votes. While Mama crooner got 8% and You composer got 4% of the votes. Check out the poll result here: Also Read - BTS V's mellifluous vocals in OST for BFF Choi Woo Shik's Our Beloved Summer mesmerises ARMY – view tweets 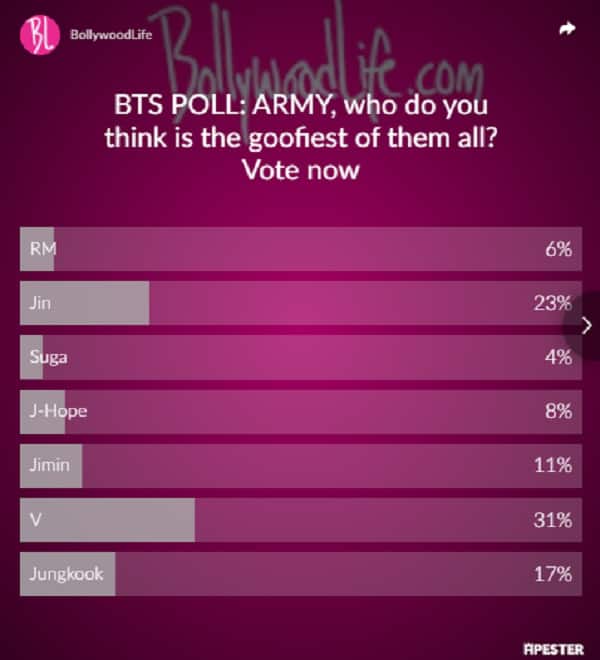 In the latest news, BTS' V had revealed his MBTI type. The boys grabbed headlines for their spoilers on their upcoming concert, Permission To Dance on Stage in LA. In their live, RM revealed that they had been renting out venues for concerts in South Korea, but due to the pandemic situation, the offline concerts couldn't take place.