On Jimin's birthday today, his biggest fans from the BTS Army pick their most favourite solo song sung by him. Has your favourite won?

It is finally D-day. While October is fondly called JimTober by BTS’ Jimin’s Army, today is extra special since it is Park Jimin’s birthday (October 13). To make the day more special for Jimin’s fans, we are finally disclosing the results of a poll we had conducted where we asked BTS' Park Jimin’s ARMY to vote for their most favourite solo song by Baby Mochi. While Jimin is a great dancer and songwriter, as a singer, his distinctive voice always stands out and captivates fans. So we gave fans 4 amazing options and asked them to make a choice and the results are out! Out of Filter, Lie, Serendipity and Promise – yes, we know, difficult to pick one. Check out the verdict. 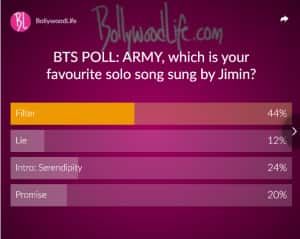 Surprised? Well, Filter has remained one of the most favourite Park Jimin songs for many. The Latin pop-Esque song shows a different side of Jimin. Filter is a part of BTS' seventh studio album, Map of the Soul: 7 and it released in February 2020. In 2020, Filter was one of the most streamed songs by a Korean artist. And it continues to achieve more heights. Check out the song below:

Meanwhile, Jimin who along with the other Bangtan Boys impressed fans and made some new records with My Universe along with Coldplay, recently revealed that working with the rock band gave BTS a breath of life again. The band’s collaborations with other artists from around the world is something that always excited ARMY and this collab with Coldplay was no different. BTS has been on cloud nine for the amazing response My Universe has garnered.