Some fans really got into comparing detail between Jin and his lookalike. A fan wrote, "Their facial features are both neat and their jawlines are sharp."

They say there are many people who look like others. But the thing is that many of us haven’t met them yet. But it’s different when it comes to celebs. Since they are famous, it is easier to spot their lookalikes. That’s what has happened with BTS member Jin. ARMY can’t keep calm over his lookalike Kim Mingyu, who is a rookie actor. He is seen as an idol on jtbc‘s IDOL: The Coup. Also Read - Trending Hollywood news today: BTS' RM calls Coldplay's Chris Martin 'rival', Madonna slams Instagram's sexist policy, Priyanka Chopra trolled for 'successful acting career' remark and more

“That picture looks so alike,” wrote a fan. Another one added, “He really looks alike in the post.” Some fans really got into comparing details. A fan wrote, “Their facial features are both neat and their jawlines are sharp. They have similar characteristics? In the post they look alike but also kind of different. Anyway, the common point is they’re both handsome.” Also Read - Fortune teller's ALARMING prediction for BTS members Jungkook, Jimin and more will leave ARMYs worried 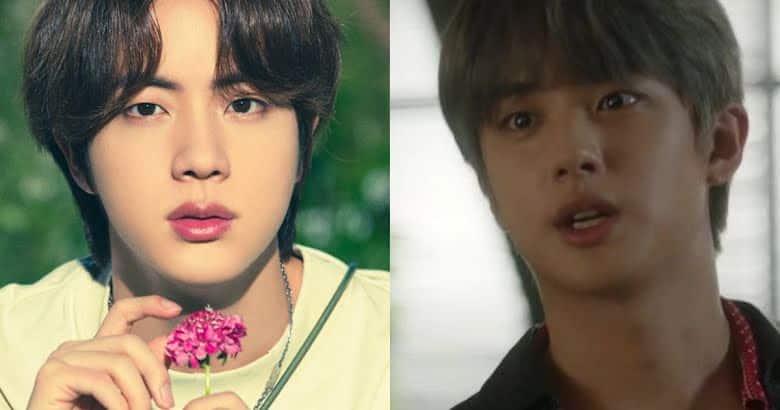 Kim was a participant in Produce X 101. He almost made it to the debut team X1 but did not make the final cut. He has been active as a rookie actor. He has put on weight which makes him look even more similar to Jin.

Talking about Jin, we got to see the strong bond shared by him and V. In an old video, we saw V coming to Jin's rescue as he doubted his dancing abilities. "I’m not as good as learning the moves, compared to others," he says. The entire group tried to encourage him. V especially makes an extra effort to make Jin feel good. "You’re good, don’t say such things," and Jimin says, “We know the best, since we’re there." As he starts doubting his dancing abilities, all the BTS members cut him off and say that he does a good job. J-Hope then jokes that he has heard that Jin even practices in shower. Over this, he replied, "Yes, in the shower. I could have hurt my head since it’s dangerous if you fall."