Kim Kardashian has been accused of damaging Marilyn Monroe's iconic dress from 1962 by wearing it for the Met Gala 2022 whose theme was Gilded Glamour. Netizens have been sharing their views on the same. 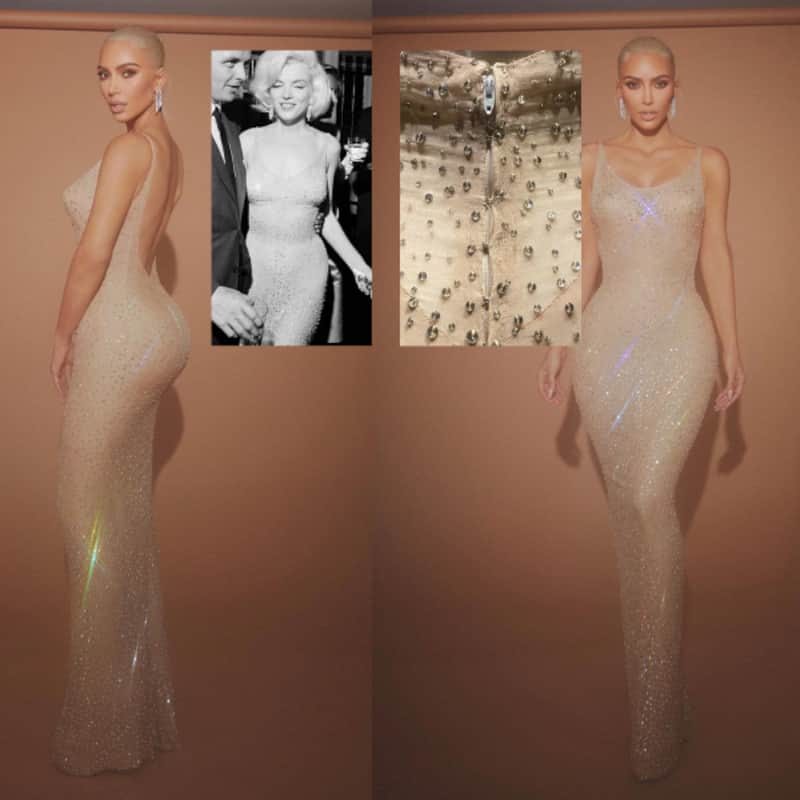 Kim Kardashian recently grabbed headlines of her beach vacay pictures with boyfriend Pete Davidson. And last month, she made noise by debuting at the Met Gala 2022 in Marilyn Monroe's iconic dress which she wore in 1962. And now, the dress that Kim Kardashian wore so fondly appears to have been damaged. Kim slipped into the sheer crystal studded dress which she borrowed from Ripley's museum in Hollywood. Also Read - Kendall Jenner sunbathes naked; Kim Kardashian, Kourtney and Khloe too have stripped down to nothing before [View Pics]

As per the latest reports, Kim seems to have damaged the dress. Pictures of Marilyn's worn dress are going viral online. It seems to have been stretched towards the zip line. Reports also state that some of the crystals are also missing. There have been pictures shared on various entertainment portals as well wherein the designers seem to be struggling to fit Kim into Marilyn's dress. And hence, Kim has been accused of damaging the iconic dress. Also Read - Khloe Kardashian secretly dating an equity investor that Kim Kardashian hooked her up with [Report]

Kim Kardashian got a mixed response when she wore the dress at the Met Gala 2022. While some loved her appearance, there were some who didn't like the fact that wore the iconic dress of an icon. And now, with the news of the damaged dress surfacing, people are slamming Kim for ruining Marilyn Monroe's dress. Kim had been getting a lot of flak and as do the staff and authorities at Ripley's. Apart from hate, Kim is also getting support. Check out the tweets below: Also Read - Trending Hollywood News Today: Bill Cosby found guilty of sexually assaulting a minor, Amber Heard and Cara Delevingne's viral kissing picture and more

This is like walking into the Louvre and throwing paint thinner directly onto the Mona Lisa. Fashion preservation is so important. This was the destruction of an irreplaceable historical artifact, all for a walk down a red carpet. I’m going to be sick. pic.twitter.com/vLooLPFLW2

Marilyn Monroe’s iconic dress has reportedly been damaged after being worn by Kim Kardashian at the Met Gala.

The dress now shows signs of tearing, and several crystals are either missing or hanging off of it. pic.twitter.com/cFu1lUBmzS

the back of marilyn’s jfk dress now… it feels illegal pic.twitter.com/wZHn8IIFRX

manifesting marilyn’s soul to haunt the shit out of kim https://t.co/7C4RTYAmDd

you are all speaking for marilyn monroe, it's the stores own fault that the dress is damaged, what did they expect? AND, stop acting like you knew her, you didn't. Let this woman rest in peace and stop acting like martyrs for a cause alienating Kim K for doing NOTHING WRONG. Xx

the internet: Kim Kardashian should've never worn Marilyn's dress it belongs in a museum she completely ruined it

I know she’s rolling in her grave

All the people saying it's just a dress, I'd like to see you get a dress tailored just for you and treat it with utmost care only for some idiot to come and ruin it in the name of paying respect. It obviously meant a lot to Marilyn, Kim disrespected her idc https://t.co/y9yLJQYJ5Q

We all saw her squeezing her butt into that delicate piece of fabric that shouldn’t be crunched or even vigorously moved to try to fit her body I mean Bob Mackie was furious and he made it for Marilyn Monroe only, and babe kim said it herself at the met that it is the real dress

Kim’s request to borrow Marilyn’s dress should have been refused. No way that dress wasn’t going to be damaged with KK’s figure squeezed into it.

marilyn gon haunt tf out kim and everyone else involved for wearing that mf https://t.co/4sBjYUzt2F

The dress was under lights and owned by Ripleys. They didn’t care about a historical piece of art and that’s why they loaned it to Kim K. I was horrified about them giving Kim a lock of Marilyn’s hair, the woman is still objectified 60 years after her death.

People are mad because marilyn literally had that dress sewn onto her with the request that noone else could wear it. It was already needing special conditions to stay together in the museum. Kim's actions are mad disrespectful. This was the ONE request of Marilyn's we could keep

This is beyond blasphemy! That fabric was 60 years old & fragile. Kim is not an iconic person, never had to fight the battles in life that Marilyn Monroe did. Why did someone allow this travesty to occur? https://t.co/iZ12W5X7kk

Scott Fortner, Marilyn Monroe collector and historian opened up and said that Kim wearing the dress was for 'publicity'. He added that the authorities should have done more to protect the dress of the 'cultural icon'. Scott told the PA agency that he didn't intend for Kim to receive the backlash. He felt the Ripley's were irresponsible in not protecting and preserving the 'cultural icon and the Hollywood icon'. "I think the disappointment that I’m experiencing is Ripley has made multiple statements that they were doing everything that they could to protect and preserve the gown," Scott said, reports Ok.co.uk.