Kim Kardashian and daughter North West made an appearance at the Paris Fashion Week a couple of hours ago. Kim got brutally trolled for her fashion sense while North got thumbs up from them. 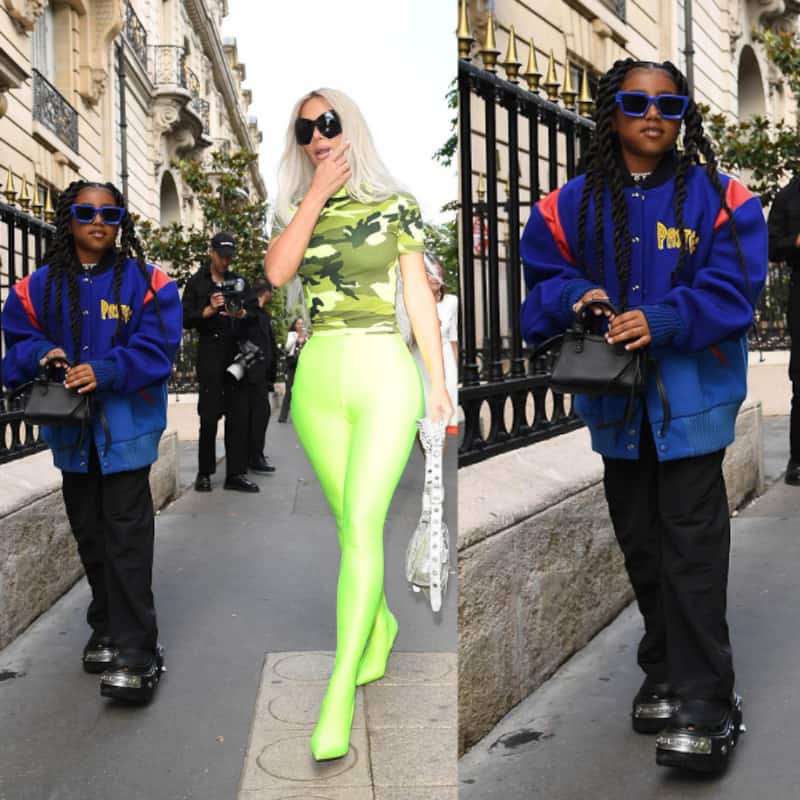 Kim Kardashian is one of the most popular influencers and socialites across the globe. She has been in the news for her fashion, her make-up and clothing line and her personal life a lot. Recently, Kim Kardashian was snapped in Paris for the Paris Fashion Week. Kim and Kanye West's daughter, North West had tagged along with her. The mother-daughter duo grabbed a lot of eyeballs for their outing in Paris. Also Read - Pathaan Shah Rukh Khan gets annoyed as a fan tries to hold him; Aryan Khan trends as he turns into a protective shield for his father [WATCH]

Kim Kardashian is known for her impeccable fashion sense. However, it seems, nowadays, netizens don't find it interesting and fashionable. Her latest outfit at the Paris Fashion Week, for example, received a lot of criticism. Kim Kardashian wore a neon green camo tee with neon green skin tights. She still got that blonde hair colour. She wore moth-style glasses along with it. Kim Kardashian and Kanye West's daughter, North West, on the other hand, wore a Pastelle jacket with black trousers and studded shoes. Also Read - Kylie Jenner steps out as a perfect biker-babe with boyfriend Travis Scott; greets fans and makes their day [View Pics]

Kim Kardashian gets brutally trolled for her outfit

Kim Kardashian's style seems to be repetitive which the netizens have noticed. They brutally trolled Kim for her camo look. Some took a dig at her saying that Kanye would have stopped styling her. Kim's blonde hair also got criticism. On the other hand, netizens were pretty impressed with North West's styling and found her to be a replica of her dad. Some even went on to say that North dresses better than Kim. Yep, you read that right. Check out the comments on Kim Kardashian and North West's pictures shared on social media here: Also Read - Koffee With Karan 7: Taapsee Pannu says her s*x life isn't interesting enough to be on Karan Johar's show; 5 times the actress created a stir with her controversial statements

Kim Kardashian and Kanye West first met in 2002-2003. They featured together in a Star Wars-themed video in 2008. However, Kim went in a different direction and married Kris Humphries. They eventually divorced and Kim and Kanye started dating. They welcomed a daughter North West in 2013. Afterwards, Kanye proposed to Kim in a dramatic style in a stadium with a Jumbotron message saying, “Pleeease marry meee!!!” There was also a live orchestra. They got married in 2014. In 2015, they welcomed a son Saint. In 2018, they welcomed a Chicago. In 2019, Psalm was born via surrogacy. In 2020, after Kanye decided to run for Prez, things fell apart. In 2021, they both got divorced.