Rihanna and A$AP Rocky are now proud parents of a baby boy; Priyanka Chopra sends love to the newest mommy in town

Congratulations! Rihanna and A$AP Rocky are now parents to a baby boy. As per TMZ, the little one arrived on May 13, 2022. Rihanna and her beau have not made the news official as yet. Fans have sent their congratulations to the couple. Rihanna and A$AP Rocky had reportedly gone through a tough patch in the last couple of months. There were rumours that the musician had cheated on Rihanna in this pregnancy period with Fenty shoe designer Amina Muaddi. There were speculations that Rihanna had ended her relationship with her boyfriend due to his alleged infidelity. But the shoe designer rubbished such gossip. It was followed by the arrest of Rocky. Also Read - BTS' Jin aka Kim Seokjin opens a thirst trap for ARMY with shirtless pictures flaunting his friendship tattoo [View Tweets]

The couple had got back to Los Angeles from Barbados, which is Rihanna's hometown. The cops arrested him at the airport. Rocky was under the scanner for an alleged shooting incident in November 2021. The reported victim said Rocky had approached him with a pistol on the street. Rocky was released after they paid a hefty bail of USD 550,000. Priyanka Chopra congratulated Rihanna sharing a pic from her photoshoot with Vogue earlier this year. In the pic, we can see the singer in her now iconic picture flaunting her baby bump. Also Read - Aashram 3 Esha Gupta flaunts her hot bod in a bikini as she hits Miami beach; 5 times she set the internet ablaze with her sizzling pictures 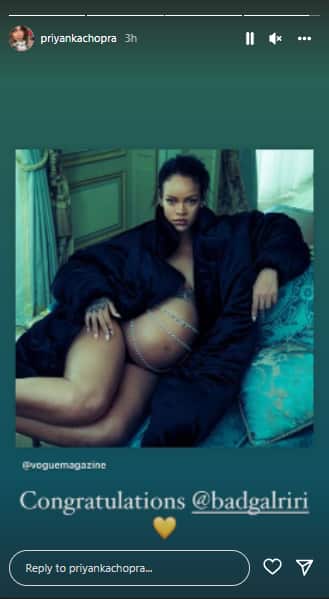 Talk of Rihanna being pregnant with her first child was doing the rounds for a while but it was in January 2022 that people saw her baby bump in a pink dress. Priyanka Chopra and Nick Jonas also welcomed their baby in January. Rihanna has taken maternity fashion goals to another level for celebs. Whether it was the black sheer outfit or her denim looks, Rihanna's swag made people fall for her, harder. Rihanna is also in the Forbes billionaire list with Fenty Beauty taking over the world. Both as a musician, style icon and entrepreneur Rihanna is doing exceptionally well.