Run BTS' new special episode featuring RM, Jin, Suga, J-Hope, Jimin, Taehyung and Jungkook is dropping in a couple of days! This time the Run BTS will be all about flying and also exercise. 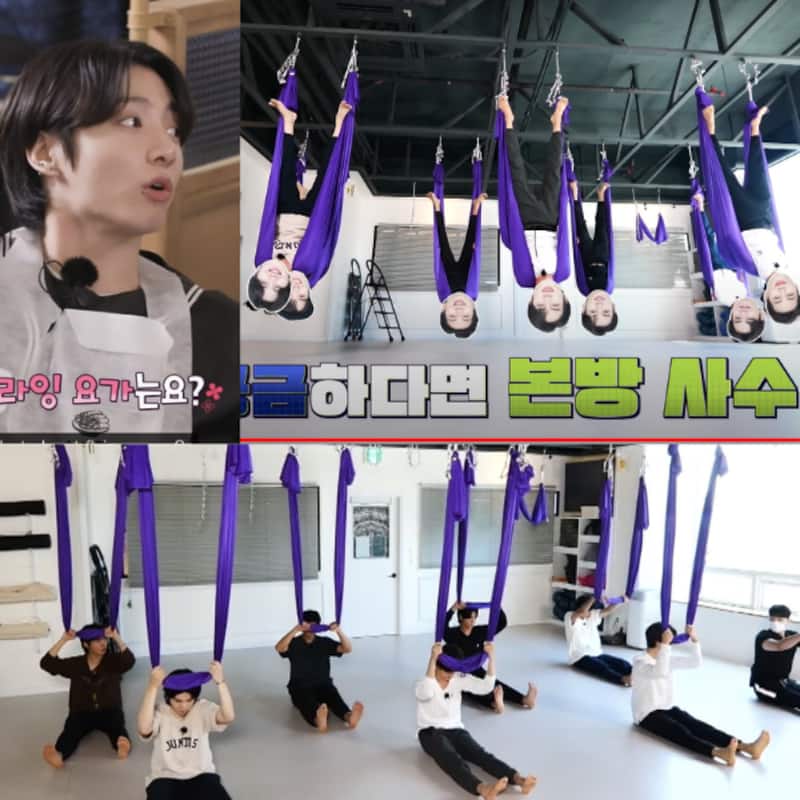 Run BTS is coming back! ARMY, we know you have been waiting for this day for so long! The Bangtan Boys – RM, Jin, Suga, J-Hope, Jimin, Taehyung and Jungkook – are returning with another episode of Run BTS and this time it's gonna be another laughter riot for everyone. This time the Bangtan Boys will dabble in ariel yoga, as Jungkook was, fly yoga. A short teaser of BTS members trying their hands at fly yoga was dropped a couple of minutes ago and it has become a huge trend on social media already. Also Read - BTS: Jungkook, Kim Taehyung and co need to pause everything and watch this kid's dance cover of Run BTS choreography [Viral Video]

A couple of weeks ago, BTS ARMY, y'all saw the test of the BTS members' telepathy skills. The members were asked to guess letters and even reach the same location based on the keywords given to them. And by the second of the second special episode of Run BTS, the members were seen discussing ideas for the next Run BTS episode. And finally, we have it. RM, Jin, Suga, J-Hope, Jimin, Taehyung and Jungkook will be attempting aerial yoga. Also Read - BTS: Jungkook's centrepiece in Run BTS from Yet To Come Busan concert is the most-played part [Read Deets]

The video teaser of Run BTS special episode Fly BTS Fly Part 0 is hilarious and how! It began with the BTS members discussing ideas wherein Suga suggest doing something like a variety show called Genius. Kim Seokjin suggests farming, Jimin suggests pole dance, J-Hope suggests food tour, Kim Taehyung suggests fencing and Jungkook suggest fly yoga! It seems everybody agreed with the Golden Maknae's suggestion. Next, we see is the member trying to be stable on the swing. Jimin and Jungkook turn kids whereas RM seems to struggle little. Hobi and Suga are amused and cannot stop laughing. Also Read - BTS: Kim Taehyung aka V shares a clip of their Run BTS rehearsals and it's proof of their immense hardwork for Busan Concert [Watch]

ARMY is definitely going bonkers over the new teaser of Run BTS. They have been sharing stills from Youtube and images of members trying their best to master each pose on the ariel yoga fabric. Check out the tweets here:

OMG RUN BTS!! FINALLY MY HEALING SHOW THAT I MISSED! MY AYANGGG IS BACK! https://t.co/nZqP6TPsor

omg run bts next week and they're doing flying yoga this is gonna be so fun ? pic.twitter.com/FOeArpsl3q

Pole dancing, flying yoga and rhythmic gymnastics all being recommended for the next coming run bts episodes. OMG RUN BTS COMING BACK SO EXCITED FOR ALL OF THESE. ??pic.twitter.com/gISGUx0pnH

As a yoga teacher, I may be little strict with bangtans.?? Seems like they are much child-like than my #kidsyoga class. Glad, i'm ARMY!?OMG RUN BTS IS BACK? Run BTS @BTS_twt ! 2022 Special Episode - Fly BTS Fly Part 0 #yogaforkids #yoga https://t.co/cdmtIcUG7u via @YouTube

OMG RUN BTS SPECIAL EPISODE IS COMING AND THEY ARE FINALLY DOING FLYING YOGA
OUR HAPPY PILL IS HERE pic.twitter.com/qhYZzyoCDl

Talking about the Run BTS episode, ARMY hoped that they’ll get a new episode every Tuesday. But their hearts were broken when after two special episodes, Run BTS had discontinued.