SAG Awards 2020: Apart from Brad and Jen, the cast of Big Little Lies had a ‘family’ reunion too

The cast of Big Little Lies aka Meryl Streep, Nicole Kidman, Reese Witherspoon, Laura Dern, Zoe Kravitz had a mini-reunion at the Screen Actors Guild Awards last night. They happily pose for the pictures and Kidman also hinted at the next season of Big Little Lies. 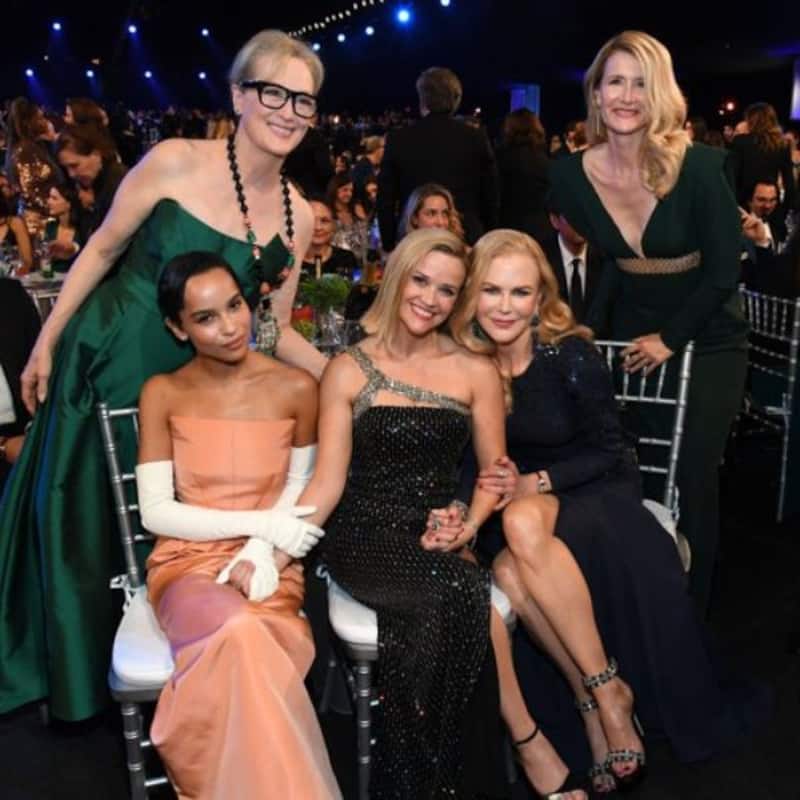 The 26th Annual Screen Actors Guild Awards were held last night and it was one starry night. One of the epic moments from the Screen Actors Guild Awards was the reunion of Exes, Jennifer Aniston and Brad Pitt. Now, that's not all to it. Apparently, there were other reunions as well. Bound to be as award nights see many actors coming under one roof. Once co-stars, former flames and such happen to cross paths one way or another. And such a thing happened with the cast of Big Little Lies. The whole star cast of Big Little Lies has a reunion like a family. Also Read - Trending Hollywood News Today: Amber Heard takes dig at Johnny Depp's star witness, Kim Kardashian allegedly damages Marilyn Monroe's iconic dress and more

Right from Reese Witherspoon, Nicole Kidman, Laura Dern, Zoe Kravitz, and Meryl Streep were seen clicking pictures. They were also seen admiring each others' designer outfits. They were seen beaming as they happily posed for a picture together. It was enough to send the fans of the show into a tizzy. The fans of Big Little Lies could not stop raving about the reunion of beautiful ladies. Also Read - Tom Cruise and Hayley Atwell break up: A look at the superstar's high profile relationships from Nicole Kidman to Katie Holmes

Here are the pics:

In case anyone was wondering...the ladies of Monterey are alive and well. ?? #SAGAwards https://t.co/GsEJjSdod2 pic.twitter.com/Hif2JbJoGi

It’s *Big Little* reunions like this that get us through awards season, honestly. #SAGAwards https://t.co/3kqzMkDcmA pic.twitter.com/N2ckjtRkte

Sooo, who do we believe: Laura Dern or Nicole Kidman on #BigLittleLies season 3 being a go?! ? #SAGAwards pic.twitter.com/efFB9XsW9z

Meanwhile, Nicole Kidman clarified her past statement about the show while interacting with the media. She said that she didn't mean that they would discontinue but just that they are "treading carefully now." "I said, 'Definitely. Just not now."

Further, Kidman added that Dern happens to be a bit busy these days. The latter replied that she would go wherever her boss would ask her to. "So when my boss calls, I’ll show up," she said.