A lucky BTS fan almost met V aka Kim Taehyung. He was just a few meters away from her and she decided to tell the world about it!

One of the many reasons why Armys love BTS so much is the fact that the K-pop superband BTS comprising RM, Jungkook, Suga, Jimin, Jin, V, J-Hope, keep surprising and treating their ARMY. They keep giving them an insight into their starry lives. Thanks to social media, BTS fans get to know more and more about their favourite members. They also ask questions and get them answered by the Bangtan Boys. However, there was a time when BTS' V aka Kim Taehyung accidentally landed outside an ARMY's house and she didn't even notice that her favourite was there. Also Read - BTS: When Jimin, V and Jungkook dished out a 'how to dance SEXILY' tutorial – watch video

In 2016, V lost in Sweden during the first season of BTS' web series Bon Voyage. When BTS members decided to take a trip to Sweden, V arrived late and ended up boarding the wrong bus and lost his way. But Taehyung being Taehyung, decided to explore the Swedish countryside solo and make the most of his leisure time. Also Read - Trending Hollywood News Today: BTS' Suga deletes first post suggesting his 'Instagram struggle', Selena Gomez 'cried like a baby' for THIS reason and more

During his short trip, V ended up visiting an ARMY's house and even clicked a few pictures with the scenic backdrop. The fan realised what had happened and uploaded a picture of hers posing the same as Taehyung did at the location. It also happened to be ARMY Selca Day. Also Read - BTS X Ishqbaaaz: ARMY imagines Jimin, Taehyung, Jungkook as Shivaay, Om and Rudra and the result is EPIC!

The fan decided to let the people know that V was just a few mitres away from her and she missed meeting and greeting him. "When Taehyung was literally outside my house and I didn't notice," she captioned the image. 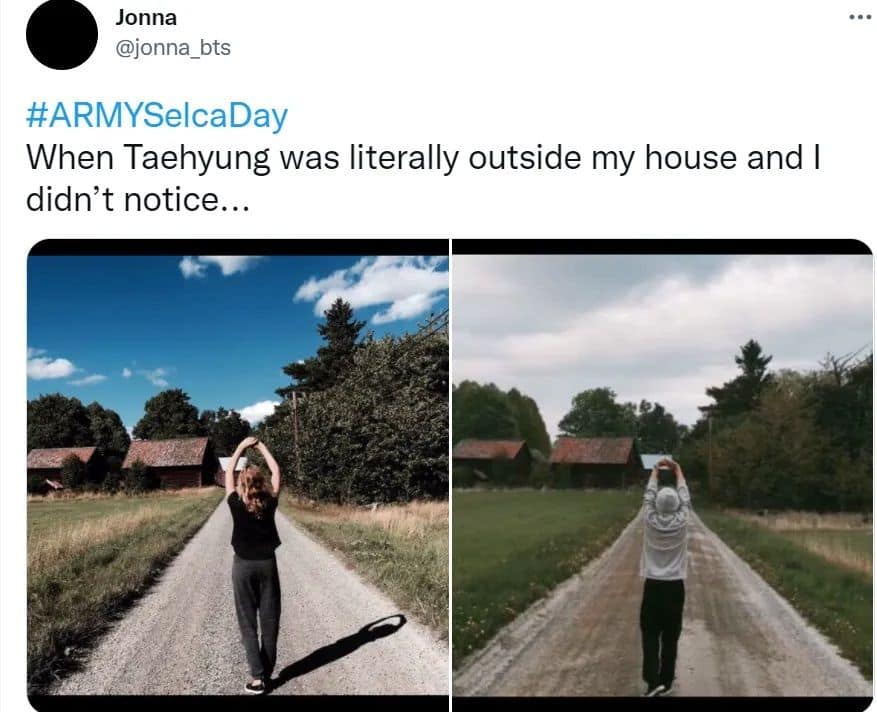 V had recently injured his leg and will perform sitting on a chair for the band's virtual gig. "V experienced pain in his calf muscles during rehearsal on the evening of October 23 and visited a nearby hospital for examination and treatment. It was the opinion of the medical personnel that while there was no issue affecting the bones in his legs, he should refrain from vigorous movement such as choreography or stage performance for the time being.

"As a result, V will take part in the performance while seated and without choreography. We ask for your understanding. We will continue to place the highest priority on the health and safety of our artists and strive to ensure that all the members of BTS can meet their fans in full health," read the statement issued by the band's label, Big Hit Music.

Following the online event, BTS will have its first in-person concerts in Los Angeles in two years next month. BTS Permission To Dance On Stage - LA will be held at SoFi Stadium on November 27 and 28, and December 1 and 2, with all tickets already sold out.