Whoa! BTS Jin's Jirisan OST Yours is all set to tie up with Adele's Easy On Me; fans say 'Never thought we'd be seeing Seokjin and Adele competing on the charts....MASSIVE'

Whoa! BTS Jin's Jirisan OST Yours is next only to Adele's Easy On Me on the worldwide iTunes chart. Fans of BTS and Kim Seokjin are raving about how Mr Worldwide Handsome has come so far in his musical journey 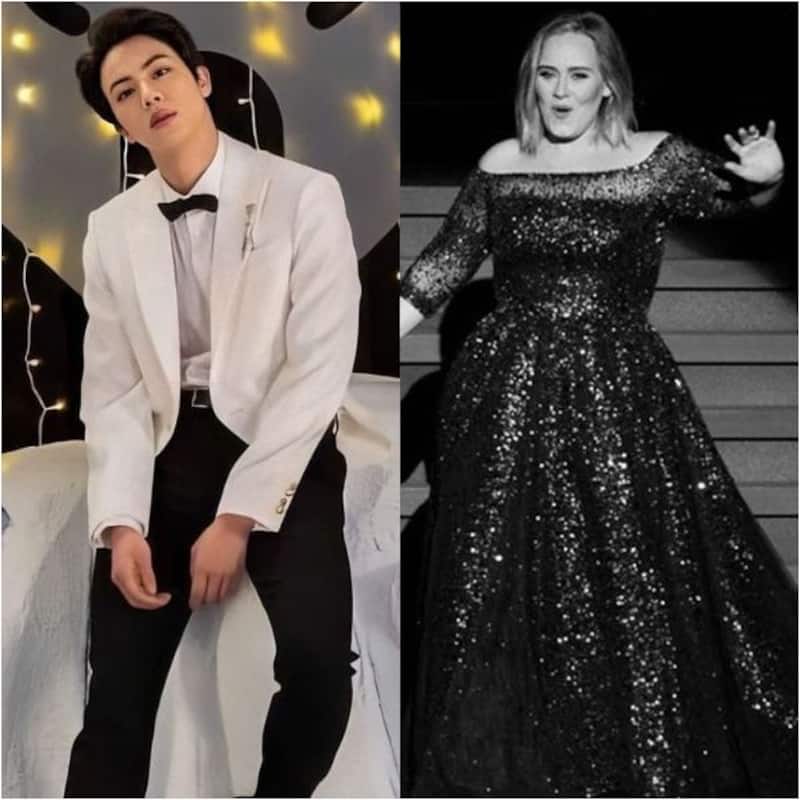 BTS fans are raving about Jin's OST for the K-Drama Jirisan which is titled Yours. It is a ballad and Kim Seokjin has done full justice to the melodious song with a rendition that is packed with emotion. Given his formal training as an actor, he did an impeccable job. The song is on the number one position in 91 countries on the iTunes chart. Kim Seokjin aka Jin looks all set to beat or tie up with Adele's Easy On Me that is reigning over 95 countries. The top four places are all held by BTS songs. This is a huge feat by Jin as the song Yours has hardly been promoted by BigHit or the makers of the K-Drama. Let us take a look at some of the records that Jin's Yours from Jirisan made in the first 24 hours... Also Read - Love BTS photo cards? Kim Taehyung, Jungkook, Jimin's pics have been sold for as much as above Rs 60K [View List]

It had a No.1 debut on the Worldwide iTunes chart in over 80 countries. This includes countries like the US, UK, Australia where English is the first language. It is a huge feat to debut on No. 1 in the US. Almost all the major nations across the continents come in that list. Previously, it was Kim Taehyung aka V's Sweet Night that reached the top place on the US iTunes chart. Also Read - BTS 'father' Bang Shi-Hyuk turns a year older; as ARMY celebrates #BANGPDDAY here are 5 facts about him every fan must know

The top four places are by BTS songs like Butter, Film Out, Permission To Dance and My Universe (BTS X Coldplay). After them it is Adele who is reigning over 95 nations. Jin is now on the second place just behind Adele's Easy On Me. So, it is the top K-Pop solo song on the chart for 2021. He is also the leading Asian solo artist on the charts. If we consider how hard Kim Seokjin worked to be known for his vocals this feels extremely heart-warming. Fans have pointed out on how proud they are to see him on the same level as Adele. He is a huge fan of the singer. Some even want a collab between Adele and Jin in the coming days. Check out tweets of proud fans... Also Read - BTS: J-Hope REVEALS how his parents reacted after seeing him perform at the Lollapalooza

Right! He was just singing Hello before and now... just WOW

He really coming for Adele? I thought we were joking....

You can't imagine the massive impact Seokjin has. An unpromoted OST beating Adele weekend etc on worldwide scale within hours of release can y'all imagine what he will achieve when he releases his mixtape!?!

He will eat up the music industry!! #YOURS #BTSJIN #JIN @BTS_twt

Music critics have hailed Kim Seokjin's silver voice. They feel he has the most stable vocals in BTS when he is just singing. We have seen how good he is with harmonizing when they sing live. This success is warming the hearts of ARMY and Seokjin fans! BTS is all set to perform with Megan Thee Stallion at the AMAs in November. Post that, they have concerts in Los Angeles.