Yes, Kat was super keep on doing her own stunts in Phantom, and yes she also criticised the prevalent sexism in the industry!

Katrina Kaif is not a barbie doll, she is as ballsy as any other action hero! Her latest release Phantom which hits theatres today has her performing a lot of high-octane action sequences. But turns out that it would not have been the case had Kat not insisted on performing stunts in the movie. Turns out that while planning the action sequences for the film, the action director kept Kat in the background. But she refused to be in shadows as her character is that of a person trained in combat. Also Read - Tuesday Trivia: Did you know not Shah Rukh Khan but THIS Khan was the first choice for Chak De! India?

Also Read - Did you know Salman Khan's Bajrangi Bhaijaan is based on THIS Chiranjeevi blockbuster? Nephew Allu Sirish spills the beans [Exclusive]

While recollecting the incident to us in an EXCLUSIVE chat, Katrina said, ""There's one situation in the promo where you see Syrian tanks approaching me and Saif saamne se, and Saif goes towards the machine gun to fire so when the shot was set up the action director had set it up that the driver who was from the army there, Saif and one other person who was behind who was also from the army, they start shooting the people in the front. And get off from the side and crouch down behind the door. So I said 1 second Sham ji (Sham Kaushal who is the action director of the film) that I am an ex-RAW agent, I am a trained person for combat and you're saying that when we are confronted with three army tanks, Saif and these two military guys are gonna shoot and I' going to hide behind the door? I said that's not happening. Kabir was somewhere on location and he came so I told him, "Kabir, they are not giving me a gun" so he was like "no no she also has to shoot!" It's our reflex to just say "haan ladki hai peeche khadi hai" I said "na uh!" I was instrumental in making that shot happen. I, Katrina Kaif might sit behind the door but in the film I am a trained RAW agent so I am going to shoot you back!" Also Read - Bell Bottom, Radhe, Satyameva Jayate 2, ’83 – 15 upcoming Bollywood biggies and their release dates – view pics 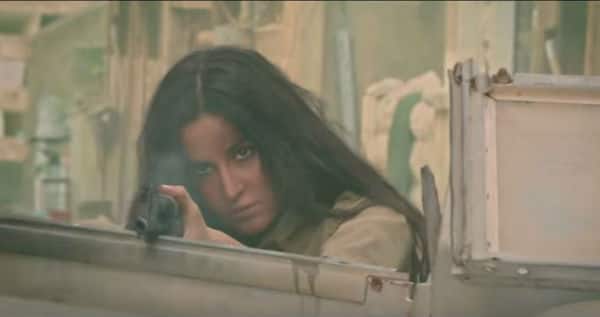 Yep, that the new Katrina we LOVE! Read our review of Phantom right here!