Priyanka Chopra: 'Kaali' is the soul of 'Agneepath' 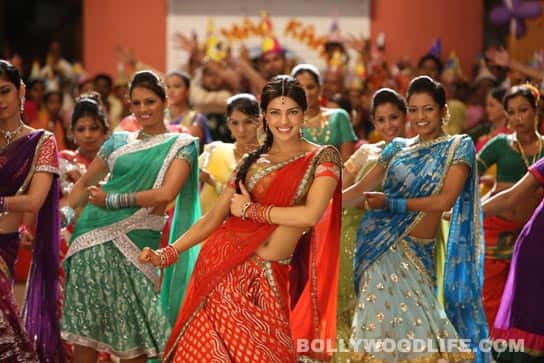 After Kaminey, Priyanka Chopra is all set to play a Maharashtrian girl for the second time in Agneepath. Wanna know what's the difference between Sweety and Kaali? Read on...

Piggy Chops, who will be seen playing the female lead opposite Hrithik Roshan in Agneepath, asserts that her character is the soul of the movie. "The best thing about Kaali (her character in the film) is that she is Vijay's strength. She is the soul, happiness and naughtiness in the film. So to prepare, I had to just follow Karan," the 29-year-old actor said at the unveiling of the second look of the film. Also Read - Trending Entertainment News Today: Shehzada producers defend Kartik Aaryan over 'unprofessional' remark; truth about Priyanka Chopra being dropped from Jee Le Zara and more

Priyanka has tried her best to keep this character as different as possible from Sweety in Kaminey. "I was playing a Maharashtrian girl for the second time. When Karan Malhotra and I discussed the film, we were very clear that we have to try to keep this character as different as possible from my character of Sweety in Kaminey because the personalities of both the girls are different. Karan was very clear about Kaali's character. So, it was very easy for me," said Priyanka who was recently seen in Don 2: The King is Back. For 2012, besides Agneepath, Priyanka has Barfee, Teri Meri Kahaani and Krrish 2 slated to release. Agneepath, which is all set to hit the theatres on January 26, 2012 also features Sanjay Dutt and Rishi Kapoor in key roles. So, will the magic of this Maharashtrian mulgi work again? Let's wait and watch! Also Read - Trending Hollywood News Today: BTS' Jin delivers strawberries to trainer, Priyanka Chopra-Nick Jonas renovate LA home for baby and more