Saif Ali Khan: ‘Agent Vinod’ will not remind you of James Bond at all! 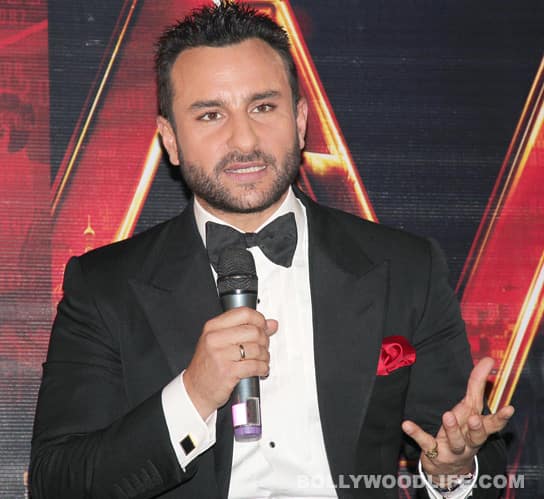 The new Nawab of Pataudi believes that India has a craving for a desi spy who fights larger-than-life odds on the international battlefield. With his upcoming film Agent Vinod, the actor-turned-producer is looking forward to capturing the collective imaginations of the Indian audience, but at the same time Saif Ali Khan maintains that Agent Vinod is not a James Bond flick!

When he emerged on to the stage quite dramatically, Saif Ali Khan gave us hope that there can be a desi spy who can take on international conspiracies without being a wannabe replica of James Bond. Wearing a tuxedo, sporting a sexy stubble and toting guns, Saif’s entry at the first look of Agent Vinod was unconventional, imaginative and cool. He talked about his mega-ambitious project and revealed what Agent Vinod is all about! Also Read - After Agent Vinod, Sriram Raghavan to make another thriller with Saif Ali Khan?

You said in an interview that Agent Vinod is a very special film for you as a producer as well as an actor. What makes this film so special? Also Read - Saif Ali Khan has issues with Vikramaditya Motwane's next film - here's why!

I think Agent Vinod is the reason why I got into film production in the first place. We have taken close to two years to make this film and I promise you that we have done something special. I wanted to make Agent Vinod first, before Love Aaj Kal, but then we at Illuminati Films decided to make love Aaj Kal first because it seemed an easier film to make. Agent Vinod is my dream project and I am pleased to tell you that it has turned out really well. So far the films I have been selling as an actor were the ones into which I could barely introduce the changes I think are necessary in terms of presentation or treatment, but With Agent Vinod it is different. It gives me immense happiness to tell you that I took liberty in making what I believed in, this time around. I am confident of the final product and the way in which the film has publicised itself. Also Read - Saif Ali Khan to appear in court on June 18 for Taj hotel assault charges

Are we going to watch the Indian James Bond on March 23?

I am glad you asked this. This is a very important question and I want to clear it. The director of the film Sriram Raghavan is a very intelligent person in the sense that he knew right from the beginning that it would absolutely stupid to do an Indianised version of James Bond. Bond is an English character. He’s against communism in Russia. He is flamboyant. He is a gadget-freak and a complete womaniser. Agent Vinod has shades of Bond, but he’s not James Bond at all. From the first scene of the film you will realise that this is not a 007 flick. Agent Vinod is an Indian hero. We are not attempting to make a copy of a Bond film. I think we Indians have a huge fascination for Bond-like characters and we at Illuminati tried to contemporarise a similar character that is a mix of Bond and Tintin, but he’s very Indian at the core.

There was a film by the same name released in 1977. Is yours going to take the same tale forward?

I had heard about this film and its funny title when I was studying in England, and I thought it was a very silly name for a film of this nature. I have seen the old film and I must say that it is a crazy one with a good plot, but our Agent Vinod is a different film altogether.

What was the intention behind retaining the same name? You could have opted for a slick and more stylish name instead...

We asked a few directors what comes to mind when they think of Agent Vinod. Many were against this title, as they thought it was a very quirky name and not as cool as it should be for this film. But then we thought, 'Vinod' is a universally popular Indian name. Very often you see this name behind autorickshaws. We also had to keep in mind the pan-India connection. There are people out there who do not have a western outlook and do not speak English. We want to reach as many people as possible with this film, so we retained the title. I agree that Agent Vinod is a very simple title, but if you write it properly, with a correct font, it looks cool. Vinod is rooted in Indian culture and his sensibilities are very desi. Saif Ali Khan can be a bit angrez at times, but Vinod is very Indian at heart.

After watching the promo, we sense that this thriller has unbelievable action sequences. Tell us about the most challenging ones, those that you found very taxing physically - what preparations went into pulling them off ...

Oh, there are many such scenes to talk about in this film! I don’t know which would be appropriate to discuss now. All I can say is that there is so much intensity in these action scenes that I had to prepare myself emotionally too. I cut myself. There are still bruises all over my body. It is not easy if you are shooting a car chasing sequence with many cars blowing up on the streets of Eastern European countries. If you ask me for one particular sequence, then I would say the opening shot in which my character is introduced was the most taxing to shoot. For that sequence alone I had to learn rash driving, rough bike riding and some forms of martial arts. It was exhausting. Though that sequence is not shown in the promo, it will take your breath away when you watch it in the film.

Generally in a spy film the male protagonist is larger than life and the women are reduced to prop-up dolls. Can you shed light on Kareena’s character in this movie?

I don’t want to reveal much, but in this film - being different from a Bond flick - there’s enough scope for the actress. Kareena’s character is very strong and substantial. It was not a conscious decision to have Kareena in the film. And as it happens normally, it was the director’s call to have Kareena in the film. Kareena doesn’t like action sequences, but she’s damn good at them. I am sure you will like Kareena in this film too for her spontaneity - her energy and her stunts will simply amaze you!

This film was supposed to be released in 2011. What took you so long?

It’s a big film with an interesting plot. There were rumours that Agent Vinod was getting delayed, and that we were crossing the estimated budget, but those, at the end of the day, are all rumours. We thought that we could finish this film in a year, but we reconsidered our decision and thought that given the action sequences and stunts it requires, it was going to be a time consuming affair. I have not seen too many films with this kind of treatment. Plus, we had to shoot at many locations all over the world. So it took us a little longer than the time I thought it would take, but it in the end all these speculations don’t matter. What matters is the finished product. We all are excited about this film and, trust me, it has turned out really well. Now we are trying to cash in on the fact that we are releasing this film on March 23, on Gudi Padwa, which is the longest weekend of the month. So the date is perfect! Also by then board exams are getting over, so hopefully we can attract more audiences.

What have you set out to achieve with this film? Is Saif Ali Khan’s superhero as ambitious as Salman Khan’s Robinhood Pandey in Dabangg and as heroic as SRK’s G.One in RA.One?

I don’t want to be compared with other Khans. They are big stars. After working for close to 20 years in the industry I want to make my dreams come true through the kind of films I want to make. I want to bring about small changes in terms of cinematic treatment and technical advancement. We at Illuminati are not comparing ourselves with others. The idea is to entertain people, nothing else! Also, I don’t want to be defined myself with a particular image. I want to dabble in roles which are diverse. I can’t play a regular lover boy at 40. I want to play slightly older, mature characters now. Lover boys are for the younger lot to play. If I try to play a 20-year-old, I will look old. I want to look younger playing the right age. I think Agent Vinod is a start in that direction and it’s a healthy start. We have made a film that will generate interest in a rickshawwallah, a middle-class man and a rich brat as well. So go and watch the film!