Bollywood Life recently caught up with Shershaah's writer Sandeep Srivastava to talk about the film's success, getting a lifetime opportunity to pen the story of Vikram Batra, his tuning with actors, how songwriting is a great storytelling tool and the possibility of the film's theatrical release.

Sidharth Malhotra and Kiara Advani's Shershaah, which tells the story of the 1999 Kargil war hero and Param Vir Chakra awardee Captain Vikram Batra, has been winning accolades from all corners ever since it released on Amazon Prime, on August 12. From brilliant performances to breathtaking cinematic experience, Shershaah has managed to strike the right chord in the hearts of the audience. Also Read - Trending Entertainment News Today: Shilpa Shetty and Raj Kundra put divorce rumours to rest; her bodyguard wins hearts and more

Bollywood Life recently caught up with Shershaah's writer Sandeep Srivastava to talk about the film's success, getting a lifetime opportunity to pen the story of Vikram Batra, his tuning with actors, how songwriting is a great storytelling tool and the possibility of the film's theatrical release. Also Read - Is Sidharth Malhotra getting married to Kiara Advani? The Shershaah actor reacts 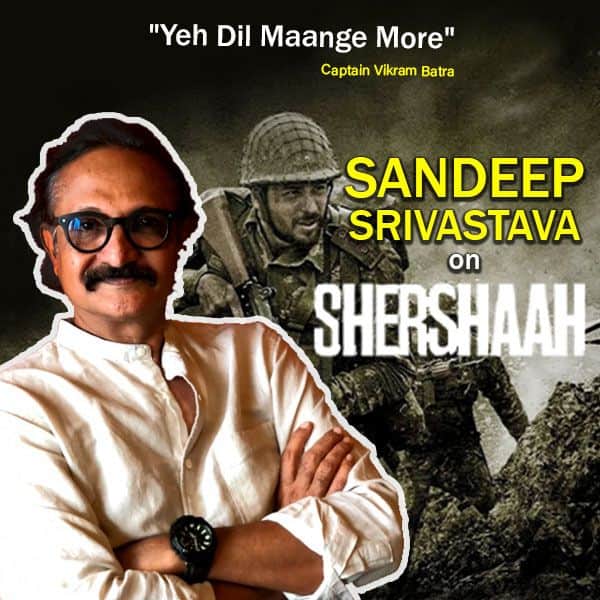 Shershaah has become a stellar hit. Did you ever anticipate that the film would garner such response from the audience?

The kind of reactions that we are getting from the audience is really overwhelming. We knew that we have made a wonderful film together. Be it the director, DOP or the actors, everybody have worked so hard in putting things together in a beautiful manner. But we had never anticipated that we will receive this huge amount of love and appreciation from the audience. 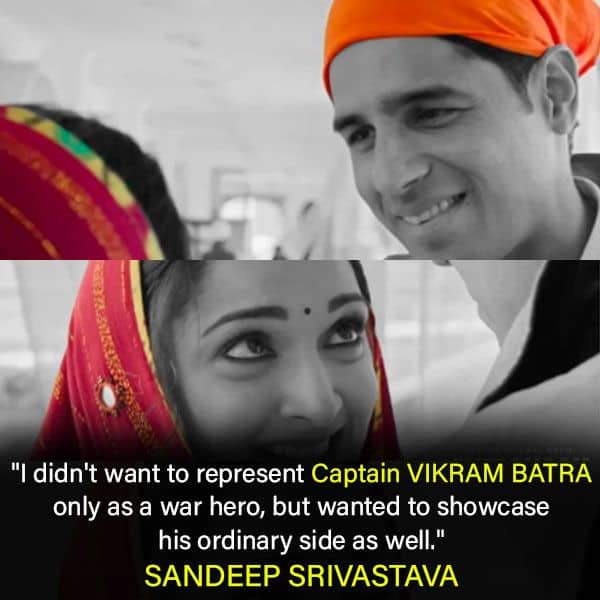 How did you approach the story of Vikram Batra? What challenges did you face?

When you are working on a biopic, there are two important things you need to keep in mind whether you are making it on a living individual or not. If the biopic is being made on a person who still alive, you interact with them and try to get their perspective about their entire life. But for Shershaah, unfortunately, we didn't have that opportunity to meet and interact with the Kargil martyr Captain Vikram Batra. The only way for me to get familiar with Batra was to speak to all of his close associates, such as school friends, family members, relatives, girlfriend, or army officers, his seniors who knew him better than us, because whatever information we had gathered was from his interviews, books or the internet. When I became my research, I felt that this information would not be enough to do justice to his biopic. My idea was to develop my own point of view about Batra rather than following other people's perspective. So I started meeting all his close associates and gradually we managed to make a plot skeleton upon which the story we could build on. We wanted to showcase the kind of a person Batra was apart from the man he was in the army uniform. I didn't want to represent Batra only as a war hero, but wanted to showcase his ordinary side as well.

Is it difficult to strike a balance between narrating a story based on a real person and entertaining the audience?

Yes, it is pretty challeging to strike that balance between storytelling and entertain the audience cinematically because you need to pick the important aspects or incidents of an individual's life that will help us narrate the story from your own point of view in those 2-3 hours duration. It is impossible to showcase all. Talking about maintaining the balance, it is a matter of craft to plot those particular life instances together skillfully so that it won't disrupt the smooth movement of the story from start to finish. So it is a collaborative process right from the writer, director, actors to editors, DOPs and others who keep working in synchronised patterns. 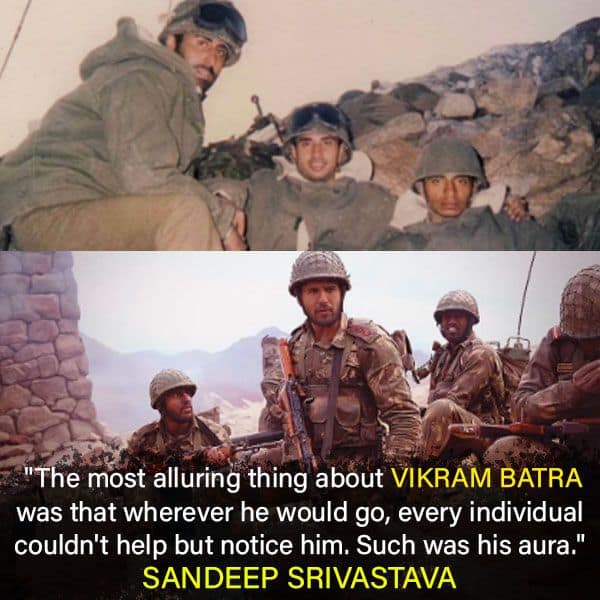 How was your experience when you met close associates of Vikram Batra?

It was really a good experience. Everyone had only good things to talk about. The most alluring thing about Batra was that wherever he would go, every individual couldn't help but notice him. Such was his aura. I got to know about this particular thing from his college friends, his childhood friends from Palampur and his colleagues. He had some kind of enerrgy that used to attract people to him instantly. So when Sidharth Malhotra makes an entry as Captain Vikram Batra, you will start living the journey as if its your own.

How much cinematic liberty one can take while penning a biopic?

Not much, really. There are certain milestones in an individual's life. So when you are making a biopic, you need to showcase those incidents as and how they have taken place in real life. You can't liberty on that. You can't create new milestones and say that this had also happened. It would be inappropriate. So we can only try to take dramatic liberty only when we can be somewhere close to the reality while switching from one milestone to another, which won't hamper the overall flow of the storyline and engagement while maintaining the entertainment quality of it.

Director Vishnuvardhan was always of the opinion that we should shoot this film at real locations because it is not meant to be shot on the sets. We obviously couldn't shoot at Point 5140 for various reasons. So we searched for a similar looking mountain terrain at 12000-13000 feet above sea level in comparison to real incident that took place at 16000-17000 feet above sea level. The credit goes to Vishnuvardhan who insisted on shooting at such locations.

Tell us about the tuning you had with the Shershaah team during the making.

It was brilliant. All the actors had developed a fabulous tuning among them and it gradually kept getting better as we worked till the end. A close bond, a comfort zone had developed between all of us that when you will see the actors performing those scenes, it will make you believe that this troop would have exactly been the same in real life. So when we began reading the script together and went to shoot at the locations, it seemed as if we were all kind of old friends. Such was the understanding. 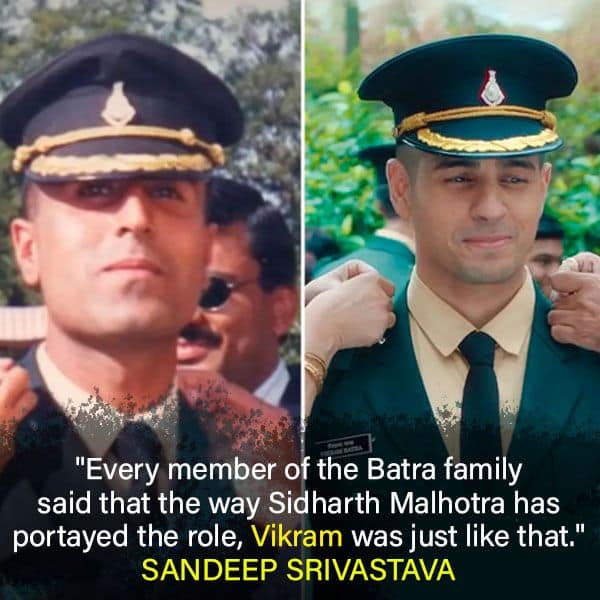 Did the members of the Batra family visit the sets?

No, No. We had met and interacted with them along with all the actors but Vikram Batra's family members didn't interfere with the film's shoot. There weren't on the sets.

What was the reaction of the Batra family after watching the film?

Now what can I say. It was really overwhelming. When you're watching someone who was your friend, colleague, husband, brother and son who passed away 20 years ago and relive all those moments on the screen, there were all kinds of emotions altogether. It takes a little time to settle down. Each and every member of the Batra family said that the way Sidharth Malhotra has portayed the role, Vikram was just like that. Also the role of Captain Sanjeev Jamwal that Shiv Pandit has portrayed on screen, Jamwal said that their interactions used to be of the similar kind, the small conflicts that transformed into a deep friendship, and everything that has been shown was bang on. They were satisfied, they were happy, they came and told us that you have done a great job actually. 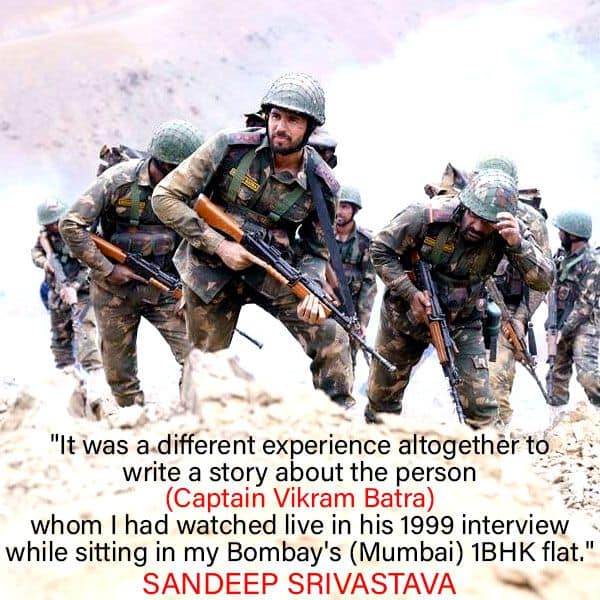 So, there was this interview of Captain Vikram Batra wherein he had immortalised the slogan 'Yeh Dil Maange More' that I had watched live in 1999 while sitting in my Bombay's (Mumbai) 1BHK flat. I suddenly felt so charged thinking, 'Ye kamal ka banda hai yaar. Goliyan chal rahi hai upar se, ye log baithe hue hai and unn pahado pe chadke maar raha hai and uske baad keh raha hai ki 'Yeh Dil Maange More'. I felt that this man must be out of this world and 'kis mitti ka bana hua hai ye'. I always had a huge respect for Vikram Batra in my heart. But I had never ever dreamt of getting a lifetime opportunity to pen down his story. So when I was first offered this project, I just felt like, 'Ke kahi se kuch taar judd gaye hai.' As a writer, I always wished to write a story about war but there was never a scope for that. And then suddenly when I got this offer out of nowhere telling me that, 'Aap likhna chahenge kya?' Producer Shabbir Boxwala, who had taken the rights from Vikram Batra's family for the film, had approached me and within 2-3 meetings we joined hands to pen down the storyline. It was a different experience altogether to write a story about the person whom I have seen giving that interview and audience are loving it. I feel blessed and maybe there some kind of guidance from up there that everything fell into the right place. 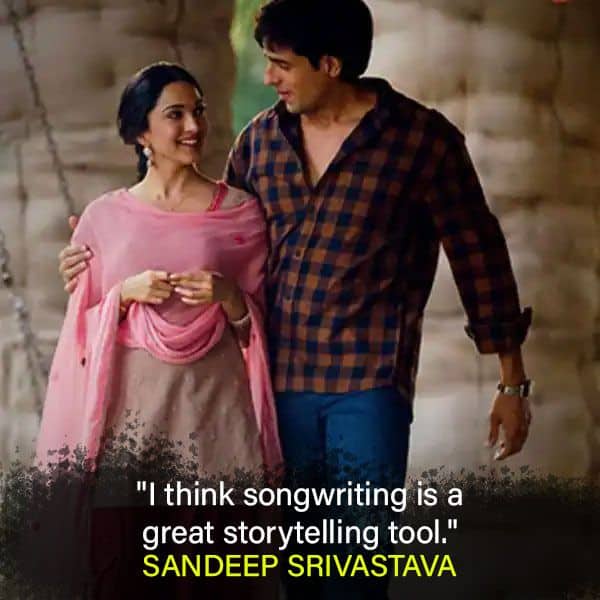 How important are songs in a biopic?

Songs are nothing but a reflection of our emotions. I love songs actually if you ask me. It is such an amazing medium that if you want to depict a story of two lovers, that might need you to write nearly 20 scenes to form the narrative, you can showcase the entire thing in just a matter of 2-3 mins. So there couldn't be a better way to tell a story. I think songwriting is a great storytelling tool. And if the songs are carrying the narrative of your story forward smoothly without disrupting the flow, then they should be a part of it.

Will Shershaah release in theatres?

It would be difficult for me to answer this question. I think the film's producers or the OTT platforms can tell whether they would like to release Shershaah in theatres as well. But one thing is clear that whatever reactions we are getting from the audience, one common feeling that they shared was, 'When will we be able to watch Shershaah on the big screen?' And the other thing is, 'Kabhi nahi socha tha ki ye film dekhenge aur rona aa jayega'. So there might be a possibility. And if you ask those who have watched Shershaah on an OTT platform, to watch the film again in theatres, then everyone would say, 'Why not?' People ahve already watched the film on OTT twice and thrice, so why wouldn't they watch it in theatres again! I would like to think positive about it because the special effects that you will feel while watching on the big screen, it would definitely make you feel as if you are there on the battlefield.