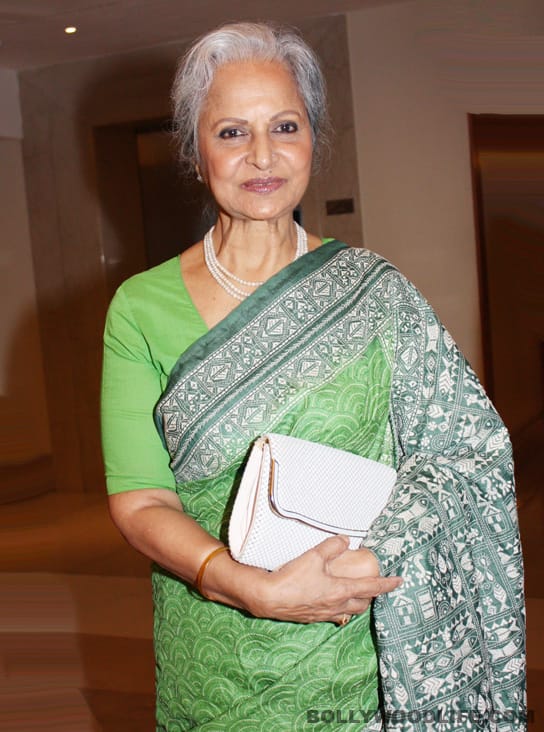 The ethereal Waheeda Rehman missed the opportunity to meet her co-star Dev Anand one last time, but fondly remembers him as a good producer. She, however, feels in recent times he got too involved with himself

"Without meaning any disrespect to him, I'd like to say that as the years went by Dev's script sense went more and more haywire. I think he got too involved with himself. Dev was a very good producer. But he needed to look out for better scripts," said Waheeda. Also Read - Before Ranveer Singh's '83 these 9 films starring Akshay Kumar, Aamir Khan and more brought alive heartwarming stories on cricket

When told her that she was Dev Anand's favourite actor, she laughed and said, "That was nice of him. We did share a very easy and warm working relationship. When he turned director with Prem Pujari, I was in the film, of course." Also Read - Gandhi Jayanti 2021: Shah Rukh Khan, Sanjay Dutt, Amitabh Bachchan, Amol Palekar and other actors who followed Gandhiji’s principles on screen – view pics

She almost didn't do her most iconic film Guide, but thanks to Dev Anand's persuasiveness, she became part of the film that she is proud of. Reminiscing about 'Dev' from Bangalore, Waheeda said, " Guide is not just my most iconic film. It is also Dev's most celebrated work. Yes, you can act as shocked as you like. But the fact is I almost didn't do Guide." "In the start, director Raj Khosla was to direct the film. Raj Khosla and I had a difference of opinion during an earlier film. I never worked with him after that. And I wasn't willing to change that for Guide or any other film. But you know how persuasive Dev was. He called up and said,'Come on, Waheeda. Let bygone be bygones. Everyone makes mistakes.' But I refused to budge. I asked Dev why his brother Goldie (Vijay Anand) wasn't directing. But Goldie was busy with Tere Ghar Ke Samne." "Eventually, Raj Khosla was replaced by Chetan Anand. But he didn't want me! I laughed. One director I didn't want and the other director didn't want me. I think Chetan saab wanted Priya Rajvanshji. But Dev was adamant. They needed a dancer. And Priyaji couldn't dance. Eventually, Goldie directed Guide. That's how I got Guide. The rest, you know. It's a film I'm very proud of." Also Read - From Aamir Khan’s bat in Lagaan to Salman Khan’s towel in Mujhse Shaadi Karogi – These iconic Bollywood props were auctioned for a WHOPPING price

Waheeda did seven films with Dev Anand, including Solva Saal, Kala Bazar and his directorial debut Prem Pujari. "So you can imagine our comfort level. In fact, my very first film in Hindi C.I.D. was with Dev Anand. I was a big fan of Dev Anand and Madhubala. So can you imagine my excitement and nervousness at doing a film with him." "On the very first day on the sets, when I called him 'Dev saab' he turned around and said 'No no, call me Dev'. I couldn't bring myself to call him by his first name, that wasn't my upbringing. So I suggested I call him 'Anandji'. He glared at me and said, 'Do I look like a schoolteacher to you?' The next day when I called him 'Dev saab', he looked around as though he didn't know whom I was addressing. I had to finally call him 'Dev'. And 'Dev' he remained until the end," she said.

However, she wasn't much in touch with Dev saab in his later years. "I got married and left for Bangalore. Then one day I got a call from Dev inviting me to the premiere of the colourised version of Hum Dono. I excused myself, saying I had a prior engagement. Dev asked me, 'How many films have you done with me?' I said seven. Then he asked how many of these were for the Navketan. I said, three. He retorted, 'Then, Navketan is like your home banner. How can you not be here for such a big moment for Navketan? Cancel your other engagement, and be there'. Unfortunately I couldn't be there. So, I couldn't meet him one last time," she said.