Read on to find out more EXCLUSIVE details from the sets...

We revealed to you first that Faisal Khan won Jhalak Dikhhla Jaa Reloaded today morning and since then social media is buzzing about his win. The young dancer has already won Dance India Dance Li'l Masters 2 and now he has another title to celebrate with his dance partner Vaishnavi Patil. But did you know how the young dancer celebrated his win? This is what you will see this weekend on Jhalak Dikkhla Jaa Reloaded. Also Read - Alia Bhatt, Urfi Javed and more — 5 actresses who rocked the risque underboob trend with panache - view pics

The show will start off with a few sizzling acts by the judges, after which the top four contestants - Mohit Malik, Sanaya Irani, Shamita Shetty and Faisal Khan, will take centre stage. After the first round of performances, a heart-broken Mohit Malik will be eliminated and the other contestants will perform another set of acts. Shamita will be eliminated after the final performances and Faisal Khan and Sanaya Irani will be the two contestants left. Also Read - When KRK made shocking predictions about Ranbir Kapoor, Alia Bhatt's marriage, 'they will get separated within 15 years'

All the four judges - Shahid Kapoor, Malaika Arora Khan, Ganesh Hegde and Lauren Gottlieb will come on the stage, along with special guest Alia Bhatt to announce the results. As Shahid Kapoor will announce that Faisal has won, the young dancer bursts out with happiness followed by tears of joy. Sanaya Irani will also be seen happy with the young dancer's victory. Also Read - Deepika Padukone-Katrina Kaif, Priyanka Chopra-Salman Khan and more: 9 Bollywood celeb duos who cannot be friends ever

Faisal has been a consistent performer and a favourite of the masses. He was seen hugging everyone including Alia Bhatt, Shahid Kapoor and Malaika Arora Khan after the show. The young kid was awarded Rs 30 lakh and a SUV.

Faisal will also be seen meeting and hugging his parents and taking their blessings after his victory. His partner Vaishnavi will also be seen doing the same. Check out the picture of Faisal Khan's winning moment on Jhalak Dikhhla Jaa Reloaded below: 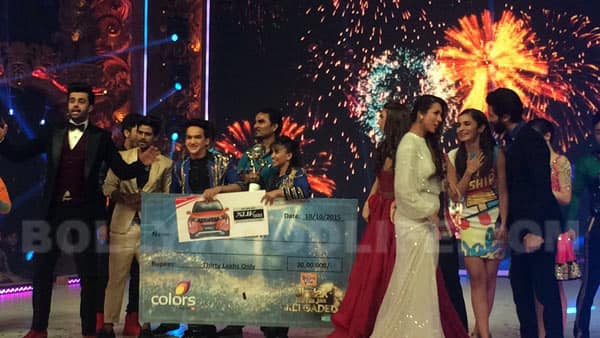