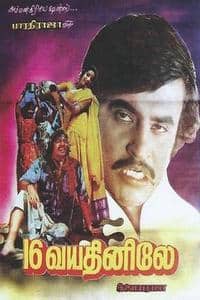 16 vayathinile (read as "pathinaaru vayathinile"; english: at the age of sixteen) is a 1977 tamil feature film directed by bharathiraja. the film stars kamal haasan, sridevi and rajinikanth. the film also marks the debut of the famous south indian comedian goundamani. the film's score and soundtrack were composed by ilaiyaraaja and cinematography was by p. s. nivas. the film focussed on rural tamil nadu and was the first tamil film to be shot completely outdoors.