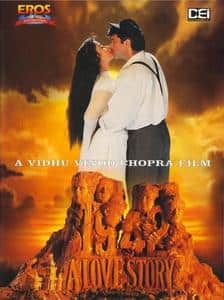 1942: a love story is a 1994 bollywood film starring anil kapoor, manisha koirala, jackie shroff, anupam kher, danny denzongpa, and pran. the film was the first ever to be given a u/a rating while featuring a scene, previously considered inappropriate for young children, showing the actors kissing. the film was highly acclaimed for its music, songs, picturization, cinematography, lyrics and the portrayal of its leading lady manisha koirala, a turning point for her career.