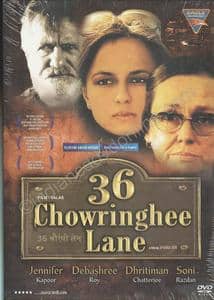 36 chowringhee lane is a 1981 film written and directed by aparna sen and produced by shashi kapoor. it marked the directorial debut of sen, who had until then been known as a leading actress of bengali cinema. the film was very well received upon release. it stars jennifer kendal in a critically acclaimed role, along with dhritiman chatterjee and debashree roy.