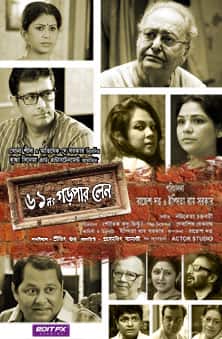 61 Garpar Lane is a Bengali film that tells a story of a landlord and his bonding with eight paying guests. Set in the backdrop of North Kolkata, the film stars Soumitra Chatterjee in the role of Jagadish Ghosh, the landowner. The crisis starts when Ghosh's son-in-law Supratik played by Priyanshu Chatterjee takes an initiative to sell the apartment to the promoters.