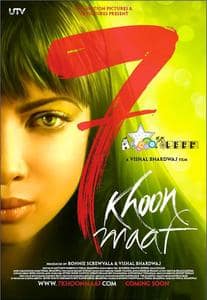 7 khoon maaf, pronounced saat khoon maaf, released internationally as seven sins forgiven, is a 2011 indian black comedy film directed, co-written and co-produced by vishal bhardwaj. the film is based on the short story "susanna's seven husbands" by ruskin bond. after bhardwaj saw the possibility of a script in the short story, he requested bond to develop the story for a film adaptation.