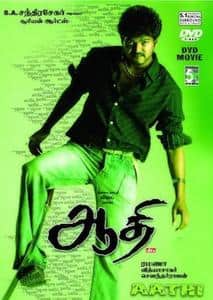 Aathi is a 2006 tamil movie. starring vijay and trisha in the lead roles. it is a remake of the telugu film athanokkade. this film was directed by ramana and was produced by s.a.chandrasekar. it was also dubbed in telugu as neneraa aadhi. the movie received mixed to positive reviews but was declared an average grosser at the box office.