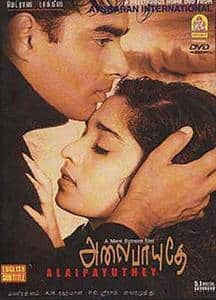 Alaipayuthey is a 2000 tamil romantic drama film directed by mani ratnam, starring madhavan and shalini, the film explores the tensions of married life and the maturing of love. the film's score and soundtrack were composed by a. r. rahman.the film's story is mostly recollected in flashbacks by the character karthik (madhavan). karthik and shakti (shalini) fall in love against the backdrop of chennai and its suburban trains, against the wishes of their parents.