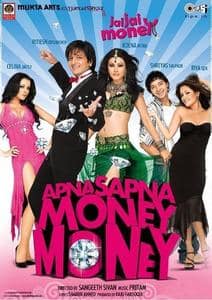 Apna sapna money money (english: money is our dream) is a bollywood film released on 10 november 2006. the movie revolves around a group of characters that eat, drink, sleep, and worship money.directed by sangeeth sivan, apna sapna money money is a tale of several characters who are in a mad race to be rich. they believe that money sets the world in motion but discover that the more one chases money, the harder it is to catch.