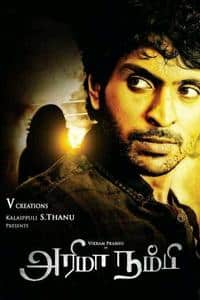 Arima nambi (english:man with the strength of the lion) is a 2014 indian tamil action thriller film directed by anand shankar. vikram prabhu, priya anand, and j. d. chakravarthy in pivotal roles. drummer sivamani made his debut as a music director in the film, which was shot by r. d. rajasekhar while the editing was done by bhuvan srinivasan. the shoot of arima nambi started on 3 june 2013 in chennai. it released on 4 july 2014 to mostly positive reviews.