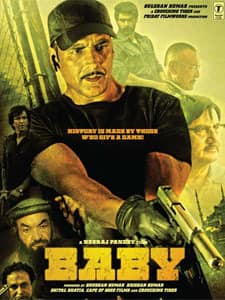 The story follows members of a fictional secret operation called Baby, a temporary task force headed by Feroz (Denzongpa) whose mission is to protect India from terrorists and whose mandate is coming to a close. While attempting to rescue a fellow Indian security agent in Turkey, Ajay Rajput (Akshay Kumar) discovers a terrorist plot against a Delhi mall which he and Jai (Daggubati) are able to prevent. In the process they learn that this was only the first in a series of massive attacks that have been planned. Terrorist mastermind Maulana (Naz), who is causing trouble near the Pakistan-India border, arranges for Bilal (Kay Kay Menon) to escape from prison. A team from Baby is dispatched, but all of the squad members on the mission except Ajay are killed in an explosion. To collect further information from a terrorist logistics planner in Nepal, Ajay and officer Priya (Pannu) travel to Nepal pretending to be husband and wife. Their plan to capture the terrorist Wasim Khan (Sushant Singh) goes wrong and Priya is trapped alone with Khan when he discovers she is spying on him. Ajay arrives to find that Priya has rendered Khan unconscious. Feroz sends Ajay, Jai and Shukla to their deep asset Ashfaq in Saudi Arabia where Bilal is making his plans. After they kill Bilal and are about to return, they find that Maulana is also at the site. Jai knocks him out and they decide to bring Maulana back to India, sedated, under the pretext that he is a relative they need to get to India for a liver transplant. After the discovery of Bilal's death, the Arab police chief Hani Mohammad (Hasan Noman) first attempts to close the airport to prevent the murderer's escape and the police almost apprehend the Baby agents. However, a short time later when he calls and finds out there are in fact 3 people on the plane headed to India under a medical visa, he smiles and lets them escape. For successfully bringing in Maulana, Baby is given permanent status