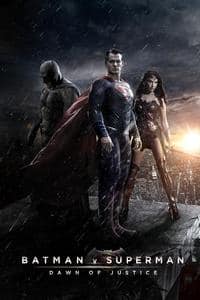 Batman v superman: dawn of justice is an upcoming american superhero film featuring the dc comics characters superman, batman and wonder woman. it is intended to be the sequel to 2013's man of steel and the second installment of the dc comics' shared universe films. the film is written by chris terrio, from a story by zack snyder and david s. goyer, and directed by snyder.