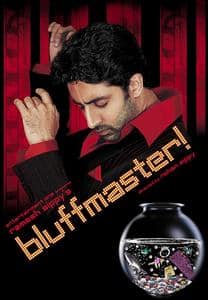 Bluffmaster is a 2005 bollywood romance comedy film directed by rohan sippy and produced by ramesh sippy. the film stars abhishek bachchan, ritesh deshmukh and priyanka chopra in the lead roles, along with boman irani and nana patekar in supporting roles. the storyline resembles the argentinian film nine queens. bluffmaster released on 16 december 2005, and received positive response from critics.