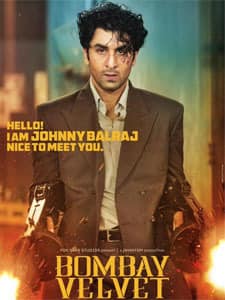 Bombay velvet is an upcoming 2014 hindi neo noir drama film directed and co-produced by anurag kashyap. it is based on historian gyan prakash's book mumbai fables, a story of how the city of mumbai became a metropolis against the backdrop of love, greed, violence and jazz music. bombay velvet is the story of one ordinary man who goes against all odds and forges his destiny to become a 'big shot'.