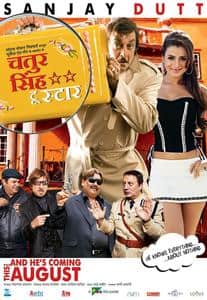 Chatur singh two star is a 2011 bollywood action comedy film, directed by ajay chandhok, starring sanjay dutt, ameesha patel and suresh menon in the lead roles. produced by mohammad aslam and parag sanghvi. it was released on 19 august 2011. the film is based on the novel chalaak jasoos.the film was a critical and commercial failure as it received negative reception from both critics and cinema-goers.