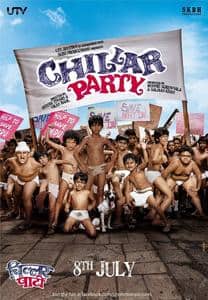 Chillar party is a 2011 indian children's film directed by nitesh tiwari and vikas bahl and produced by ronnie screwvala under the utv motion pictures and salman khan under his skbh productions (salman khan being human productions). the film has a multiple-cast of debuting child-artists particularly named after movies such as, "silencer", "aflatoon", "shaolin" etc. it also features ranbir kapoor in an item-number. chillar party won the 2011 national film award for best children's film.