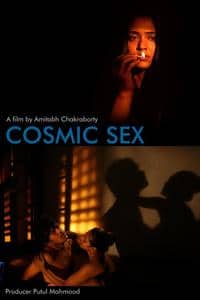 Cosmic sex is a 2014 art-house independent bengali film written and directed by amitabh chakraborty and produced by putul mahmood. the film deals with the connection between sex and spirituality. cosmic sex is the story of a young man kripa who is on the run from sex and violence one night in kolkata when he meets a woman sadhavi who strangely resembles his dead mother. she gives him shelter and teaches him to travel inwards through sex.