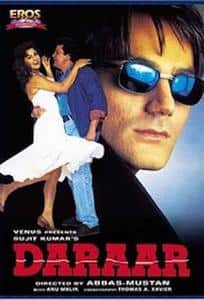 Daraar is a 1996 hindi thriller film directed by abbas-mustan starring juhi chawla, rishi kapoor and arbaaz khan in his film debut. khan received the filmfare best villain award for his portrayal as a possessive husband. the film is inspired by the julia roberts thriller sleeping with the enemy