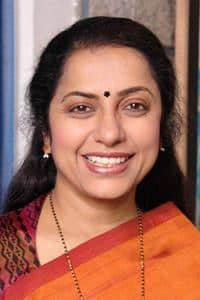 Dharmathin thalaivan is a 1988 tamil film directed by s. p. muthuraman, starring rajinikanth, prabhu ganesan, charlie, nassar, captain raju, kushboo and suhasini. the film is the remake of hindi movie kasme vaade starring bollywood mega star amitabh bachchan and randhir kapoor. the film marked the debut of kushboo in tamil cinema. it was declared superhit at the box office and completed a 100 day run in many centres.