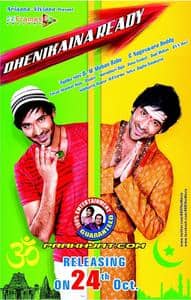 Dhenikaina ready is a controversial telugu slapstick comedy film directed by g. nageswara reddy and produced by mohan babu. the film features vishnu manchu and hansika motwani in the lead roles. the movie was dubbed in malayalam as endhinum ready and was released simultaneously with telugu. this film is a remake of the malayalam film udayapuram sulthan.