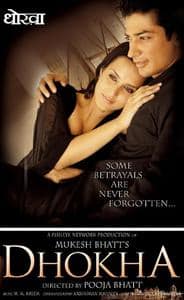 Dhokha is a film that stars muzammil ibrahim and tulip joshi in the lead roles. it is directed by pooja bhatt, produced by mukesh bhatt and music by m. m. keeravani. the film revolves around a moderate indian muslim cop, who wakes up and to his horror, discovers that his wife, who had recently been killed in a bomb blast, is accused of being a suicide bomber and had killed 20 people in the club.