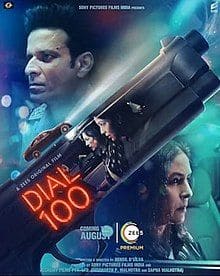 Dial 100 is a thriller film starring Manoj Bajpayee, Neena Gupta and Sakshi Tanwar, which will premiere on 6th August on Zee5. Manoj Bajpayee will be seen playing the role of an emergency call operator in the film. At the same time, Neena Gupta has become the host. From the trailer of the film, it seems that its plot has been taken from Halle Berry's psychological thriller 'The Call' which came in the year 2013. Dial 100 Pictures Films India is produced by Sidharth Malhotra and Sapna Malhotra's Alchemy Films and directed by Rensil D'Silva. On the other hand, Sakshi Tanwar plays an important role in the film as the wife of Nikhil Sood (Manoj Bajpayee), who also gets caught in this mess. In a recent interview, Manoj Bajpayee had said that, 'It is a unique film with lots of twists and turns that will keep the audience hooked till the end. Dial 100 was an experience for me and I am sure the audience will feel the same after watching it.