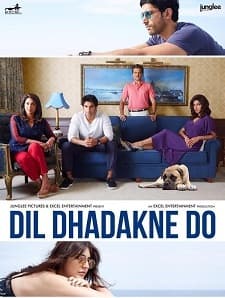 Dil dhadakne do is a hindi film, directed by Zoya Akhtar and produced by ritesh sidhwani and farhan akhtar's excel entertainment. the film features an ensemble cast including farhan akhtar, ranveer singh, priyanka chopra, anushka sharma and anil kapoor. the film evolves around a dysfunctional punjabi family on a cruise trip where the film is based on. the film is slated to release on june 5, 2015.