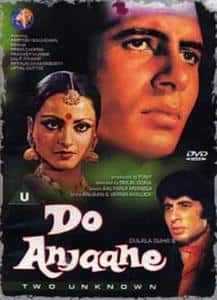 Do anjaane (english: two strangers) is a 1976 hindi drama-thriller film, produced by tito, it is directed by dulal guha. the film stars amitabh bachchan, rekha, prem chopra, pradeep kumar, utpal dutt, lalita pawar and a young pre-stardom mithun chakraborty. the music is by kalyanji anandji. the film became a hit at the box office. it was remade in telugu as "maavari manchitanam" (1979) starring n.t. ramarao and vanisri.