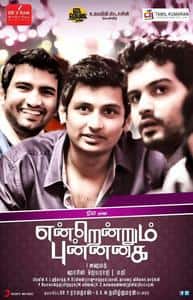 Endrendrum punnagai (english: everlasting smile) is a 2013 indian tamil romantic comedy film directed by i. mueenuddin ahmed starring jiiva, trisha krishnan, vinay rai and santhanam. the film has music by harris jayaraj and cinematography by r. madhi. the film was launched officially in chennai on 29 june 2012. upon its release on 20 december 2013, the film met with positive reviews from critics and became a commercial success.