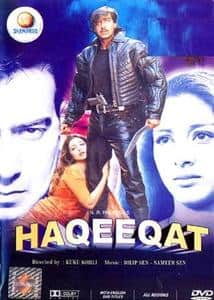 Haqeeqat is a 1964 hindi war-film directed by chetan anand. the movie stars balraj sahni, dharmendra, priya rajvansh, sanjay khan and vijay anand. the music is by madan mohan and the lyrics by kaifi azmi. the movie was based on the 1962 sino-indian war. it won the national film award for second best feature film in 1965.