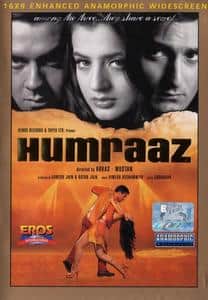 Humraaz (hindi: हमराज़, english: confidant) is a 2002 bollywood romantic thriller film directed by duo abbas-mustan and produced under venus movies banner. released on 5 july 2002, it stars bobby deol, akshaye khanna and amisha patel in lead roles.the film performed very well at box office and was declared as a 'hit'. the film was nominated for several filmfare awards including the best film, abbas-mustan for filmfare best director award and akshaye khanna for the filmfare best villain award.