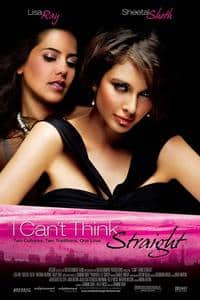 I can't think straight is a 2008 romance film about a london-based jordanian of palestinian descent, tala, who is preparing for an elaborate wedding. a turn of events causes her to have an affair and subsequently fall in love with another woman, leyla, a british indian. the movie is distributed by enlightenment productions. it was released in different theatres between 2008 and 2009. the dvd was released on 4 may 2009. the movie is directed by shamim sarif and stars lisa ray and sheetal sheth.