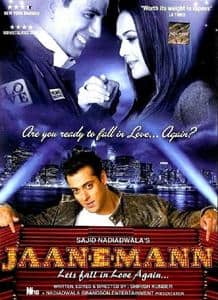 Jaan-e-mann (translation: sweetheart) is a 2006 bollywood romantic comedy drama film starring salman khan, akshay kumar and preity zinta in the lead roles. the movie is directed by shirish kunder and is produced by sajid nadiawala. the film re-unites salman khan and akshay kumar post the success of mujhse shaadi karogi (2004). this was shirish kunder's first film as a director. he also edited and wrote the dialogues and screenplay.