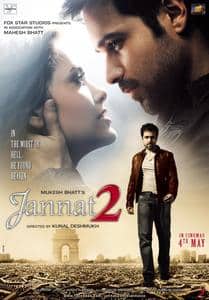 Jannat 2 is a 2012 bollywood crime thriller film and the sequel to the 2008 movie, jannat. the film is written by shagufta rafiq, directed by kunal deshmukh, produced by mahesh bhatt and mukesh bhatt and features emraan hashmi, randeep hooda and esha gupta in lead roles. the storyline is based on the issue of illegal arms in delhi. the movie was given an 'a' certificate from the indian censor board due to its violent content and language.