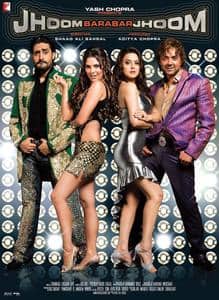 Jhoom barabar jhoom is a 2007 bollywood film starring abhishek bachchan, preity zinta, bobby deol and lara dutta. it is directed and co-produced by shaad ali. the film is produced by aditya chopra and yash chopra under yash raj films. the film released on 15 june 2007.