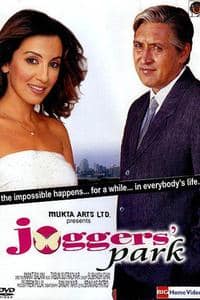 Joggers' park is a 2003 bollywood film made in english and hindi. it is directed by anant balani and written by subhash ghai. it stars bengali actor victor bannerjee, perizaad zorabian and divya dutta in lead roles. it was filmed on location in mumbai's jogger's park. it was inspired from the storyline of 1986 film anokha rishta starring rajesh khanna.the film released in 2003 and did well at the box office, opening the way for a new genre of films like mumbai matinee and morning raga.