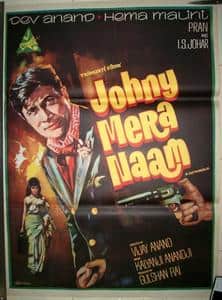 Johny mera naam (english: my name is johny) is a blockbuster 1970 crime/comedy/drama film. directed by vijay anand, it stars the director's brother, dev anand and pran in the roles of brothers separated in childhood. hema malini, jeevan, premnath, i. s. johar and iftekhar also star in this movie. it is considered a dev anand classic.at the 18th filmfare awards, vijay anand won the filmfare best screenplay award, while actor i.