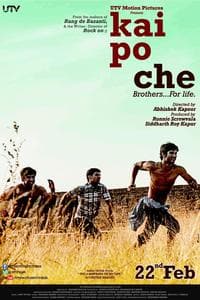 Kai po che! is a 2013 indian drama buddy film directed by abhishek kapoor based on chetan bhagat's novel the 3 mistakes of my life, with music by amit trivedi and lyrics by swanand kirkire. sushant singh rajput, rajkummar rao and amit sadh star as the three main protagonists while amrita puri plays the female lead.